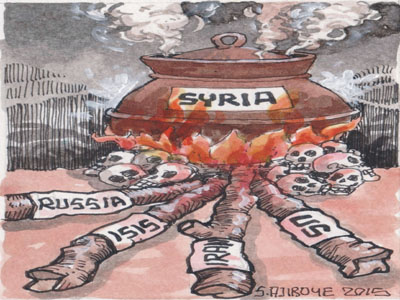 Every now and then, some wise journalist is able to bring the Syrian conflict into clear political focus helping us to see how events a being fulfilled prophetically. The following article, along with my commentary, will help to put the political reality on the ground into context with the Bible.

The Australian online news site notes the ongoing conflict in Syria has much in common with the Thirty Years’ War, which devastated the heart of Europe — particularly the German city of Magdeburg, the Aleppo of the time — from 1618 to 1648.

The war was a succession of conflicts that visited immeasurable suffering upon Europe’s population, ending, with the Peace of Westphalia, only when all of the parties involved had ­become utterly exhausted.

What is strange about this is that the night before I read this article, I went to bed thinking that Daniel 11:40-45 describes the King of the North defeating Israel in what appears to be a decisive battle, but it doesn’t describe the smaller conflicts that I expect to precede it. This kind of war “skirmish war” can go on for years, possibly even past President Trump’s time in office.

Now, let’s read some more from The Australian.

[The Thirty Years’ War] was a conflict ­between Catholic and Protestant Christians, just as the main divide in today’s Middle East is between Sunni and Shia Muslims.

I wanted to read that last sentence to drive home the point that I’ve been making for years now which is that this is a religious war between two Islamic factions and there are others, even in the secular world, who see this, too. Israel has been in the middle of this conflict since the Jews began to return to their homeland in the late 1800s. Their independence in 1948 has come at big price for them and further stirred the hatred pot toward them, but it also added the Sunni-Shia conflict. Muslims now have two reasons for war: 1) Hatred of the family of Jacob, part of whom have partially returned to God’s land, and 2) hatred of each other’s Islamic doctrines.

Now, back to the Australian. Here is a good summary of the complications involved in the Syrian war.

The war expanded to include a US-led campaign against the Islamic State. But when ISIS was defeated last year, another conflict between Turkey and the Kurds in northern Syria ensued. Now, the US-allied Kurdish YPG, who proved indispensable in the fight against ISIS, are being targeted by Turkey which raises the possibility of a direct military confrontation between two NATO allies – the US and Turkey. Moreover, there is also a growing risk of [continued] confrontation between the US and Russia, underscored by recent reports that a US airstrike killed dozens of Russian mercenaries in Syria.

With every new chapter, the Syrian tragedy seems to get more dangerous. The conflict is no longer about who holds power in Damascus, but about who holds hegemony in the Middle East. The struggle is not only between Russia and the US, but also pits Shia Iran against Sunni Saudi Arabia, which has increasingly aligned itself with Israel, another US ally.

The closer we get to the conflict between the Kings of the North and South, the more journalists will recognize the situation and participants for what it is and who they are. Journalists won’t call Iran the “King of the North” and Saudi Arabia the “King of the South”, but it will become clearer to more people over time who these are in the prophetic perspective.

Now, back to the Australian.

Turkey, for its part, is driven primarily by the fear a Kurdish state will be established in northern Syria, which could encourage separatist Kurdish factions in southeast Turkey. Indeed, the Kurds in northern Iraq have ­already been vying for their own state, and even held an independence referendum last year.

Finally, Israel, the region’s military superpower, has its own security interests in Lebanon and southern Syria.

Until recently, Israel had ­mostly kept out of the war. But it has had to intervene from the air to block arms shipments from reaching Hezbollah, and to prevent Iran from establishing a presence near its northern border.

Israel’s involvement increased earlier this month when it shot down an Iranian drone that had entered its airspace from Syria. Israeli warplanes responded by striking Iranian targets in Syria. One was shot down by Syrian antiaircraft fire which prompted Israel to strike Assad’s forces directly.

Here’s the kicker, the truth coming forth about Israel’s relationship with Russia – i.e. there really isn’t one. I like the way The Australian article states it.

As these events unfolded, it quickly became clear that Israel could not rely on the supposed special relationship between ­Russian President Vladimir Putin and Israeli Prime Minister Benjamin Netanyahu. Russia proved ­either unwilling or unable- to control Iran. So, whether it likes it or not, Israel is now an active player in the Syrian conflict.

This article does not express the information that I studied about who the Russians really are – they are ancient Persians dispersed to the far north because of ancient wars. This is an important factor for Bible prophecy watchers to understand because it explains why the Russians and Iranians are sticking together – and will stick together. They are both the remnant people of ancient Persia who will fulfill the last ‘King of the North’ invasion into Israel.

Daniel 11:2 “‘Now I’ll tell you the truth: Look! Three more kings will arise in Persia. Then a fourth will gain more than them all. As soon as he gains power by means of his wealth, he’ll stir up everyone against the Grecian kingdoms.

The Persians ultimately lost to the Greek Alexander the Great.

The scripture now focuses on the two kingdoms – Ptolemy in Egypt and Seleucid in the north. The Seleucid empire flanked what is now modern Israel. Ptolemy (Egypt) and Seleucus (northern Middle East) engaged in a 20-year struggle for dominance, but Seleucus in the north emerged as the stronger party with the largest kingdom.

The map shows the Seleucids in roughly the same configuration as today’s 4+1 coalition with somewhat more territory to the east than this coalition currently occupies. 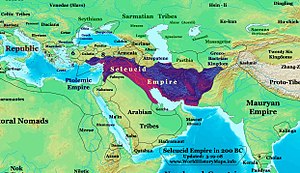 The three ‘King of the North’ wars happened in the 3rd and 4th centuries BC. Then, there is a very long pause in these wars, a pause which goes all the way to the end of days.

Daniel 11:40 starts with “at the time of the end”. I suspect the modern Persians are a mixture of all the ancient peoples – Babylonians, Persians and Greeks, and perhaps even Romans – who are all Edomites (descendants of Jacob’s twin brother, Esau), according to Daniel’s own description – and who all want possession of God’s land. The land represents Esau’s blessing that he lost to Jacob because Esau failed to perform as a firstborn son. The birthright is Esau’s right to rule Isaac’s family that he sold to Jacob because he failed to recognize his proper place in God’s plan.

It is precisely on this front that another war could ensue, this time between Israel and Iran. Such a conflict would serve neither party’s interests, but it is easy to see how it could happen anyway, given the current realities.

Israel simply cannot stay out of the conflict while Assad’s regime, Russia, Iran and Hezbollah secure a military victory. The facts on the ground are fundamentally threatening Israel’s own security, and dramatically strengthening its enemy, Iran.

A war between Iran and Israel (with Saudi Arabia in the background) will imperil the entire region because it is yet another battle for hegemony.

Europe will be directly affected because a larger conflict will send even more refugees north and, with President Donald Trump threatening to sabotage the Iran nuclear deal, Europe could find itself in a dangerous arms race — or even another great war — unfolding not far from its borders.

Given these dangers, Europe can no longer afford to watch from the sidelines. Europeans must defend the Iran nuclear agreement for the sake of their own security. And because the EU has longstanding obligations to Israel, it must not allow a violent hegemonic struggle that would directly threaten Israel.

Herein lies one of the conflicts of the Gog-Magog war which I believe will happen very close – either just before or just after – the ‘King of the North’, Iran – sweeps through the region to conquer his Sunni enemies. The reason I believe the Gog conflict is a battle in the ‘King of the North’ war has been explained many times on Beast Watch News, so I won’t explain again now.

Ezekiel 38:21 says: Then I’ll call for war against Gog on top of every mountain,’ declares the Lord GOD, ‘and every weapon of war will be turned against their fellow soldier.

Europe’s adamant defense of the Iran nuclear deal, along with another factor – the Israeli-Palestinian conflict – will start Gog’s own people, the Hebrews of the ten lost Tribes who settled in Europe, to engage in conflict with each other. This time, though, they won’t just have a war of words. This time, it will be a military battle.

The Syrian conflict is escalating and will fulfill many prophecies including that Damascus will become a heap of rubble (which it nearly is now), it has triggered Gog to become Israel’s guardian (as prophesied in Ezekiel 38) and is moving toward the Daniel 11:40-45 fulfillment of the King of the North and South war. Buckle your seat belt.