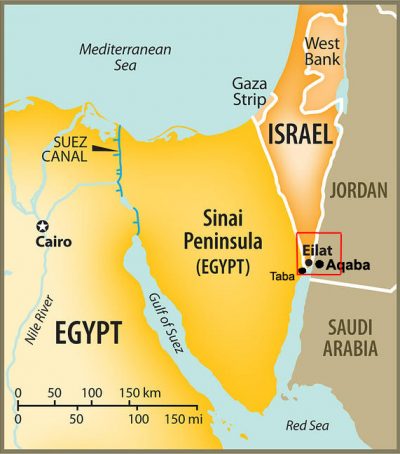 Alliances may be shifting among the global powers. On October 5, 2017, Saudi Arabia’s King Salman paid a visit to Russia’s President Vladimir Putin. It wasn’t just a visit for a friendly chat. Something much larger was in play. A new Middle East project, one that will be partially funded by Russia, is the visible sign of Saudi Arabia’s shifting politics. This new project is a city called NEOM.

King Salman’s visit resulted in the creation of the RDIF (Russian Direct Investment Fund). From this fund, Russia and Saudi Arabia are partnering, along with other investors, to build a ‘new future’ for Saudi Arabia via a city named NEOM. Saudi Arabia just won Russia’s backing for its new mega city said to be 33 times larger than New York City. The amount of Russia’s investment appears to be $10bn.

The city, which has been named NEOM, will be built from the ground up on a massive greenfield site in northwest Saudi Arabia. It will span over 26,500 square kilometers, an area more than 33 times bigger than New York City. The city already has its own Twitter account and website.

The city’s name, NEOM, holds clues about its creators’ intent. According to Al Arabiya, the first three characters “NEO” comes from the Latin word which means “new”. The fourth character “M” is the abbreviation of the Arabic word “Mostaqbal” which means “future.” New future.  What kind of “new future” are they referring to?

NEOM’s land mass will extend across the Egyptian and Jordanian borders, rendering NEOM the first private zone to span three countries.  The project will be backed by more than $500 billion  and is expected to transform the Kingdom into a leading global hub through the introduction of value chains of industry and technology.

Along with this announcement came others. Prince Mohammed pitched NEOM as part of a “new generation of cities,” a departure from the kingdom’s existing urban landscape. He said the city will be free to operate outside of governmental regulations. The city will rely entirely on wind and solar energy. All transportation within the city will be automated, and plans call for the construction of a massive bridge over the Red Sea to the Sinai Peninsula of Egypt. And Saudi Arabia, which is known for its ultra conservative rule, is moving to a more “moderate” form of Islam that is open to all religions. NEOM will be fully automated.  People will enjoy the sun, the sea and robots. Bloomberg reports that NEOM will have more robots than humans.

One thing that could happen is that Saudi Arabia could recognize Israel. The Gulf of Aqaba was chosen not just because it would allow NEOM to spread into Egypt and Jordan, but also because of its proximity to Israel, which is promoting its “Red-Med” railway proposal as the perfect Mideast complementary component of the New Silk Road. Tel Aviv keenly knows that the Chinese are always looking for backup plans and transport route diversification in order to not be too dependent on any single connectivity corridor, and in this case, overland rail transit from the Gulf of Aqaba to the Eastern Mediterranean via Israel comes off as exceedingly attractive to Beijing’s strategists. Furthermore, China has fantastic relations with both Saudi Arabia and Israel, so from Beijing’s perspective, this is the perfect Mideast “win-win”, especially if the People’s Republic can find a way to insinuate that its possible financing of both the NEOM and “Red-Med” projects contributed to bringing peace to the Mideast.

Perhaps Saudi Arabia is attempting to back down from Iran by building this futuristic city with Iran’s ally, Russia, and announcing plans to become more moderate in religious matters. It appears likely that there is more to this city than is being reported in the news. The fact that this city will sit in the Gulf of Aqaba, will span Jordan and Egypt and will have ties to Israel’s “Red-Med” railway appears suspiciously as an attempt to counter what the Russians and Iranians have done in the northern realms of the Middle East.

The grand intent behind this isn’t just to formalize the Saudi-Israeli anti-Iranian partnership or to show the world just how serious the Crown Prince is in changing the course of his country, but to please Riyadh’s newfound Multipolar Great Power partners in Moscow and Beijing, both of which enjoy exceptional relations with Tel Aviv but would probably be reluctant to invest in the Kingdom’s NEOM city-state project so long as its connectivity access remained dependent on the Suez Canal chokepoint.

Perhaps NEOM signals a political shift in Saudi Arabia away from the United States and toward Russia. Perhaps the pundits are getting it right. Or perhaps they are not. Let’s consider some other options for a moment.

It may be that the new Saudi-Russia partnership is another attempt to realign Russia with the West. It may be that this is another attempt by Donald Trump to heal the breach in the global New World Order. Instead of this situation foreshadowing Saud Arabia’s departure from the Western New World Order, perhaps it is a grand attempt at helping the United States to maintain its globalist hegemony. Obtaining the participation of the Russian government in a western-oriented project of this magnitude may have been a real coup.

If the attempt works, we could see peace in the Middle East. If not, there will be war. A Saudi-Israeli partnership will certainly increase the fury of the Iranians against Israel and the U.S. The Russians will not be willing to suffer the loss of Iran as an ally for continuing to participate in this deal should Iran make a fuss over it. It is possible that the Russians and Iranians are eyeing NEOM as their own door into total control of the Middle East through business deals and economic alliances rather than war  (see links below). In the end, Daniel 11 is clear. There will be war regardless of the plans of man.