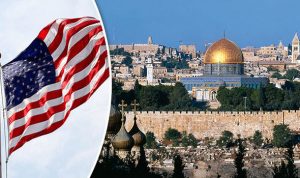 The US president’s vision for peace in the Middle East remains nebulous after the White House spoke with Abbas last Friday. The president emphasized his personal belief that peace is possible and that “the time has come to make a deal”. Jason Greenblatt, a Trump lawyer turned special envoy, was due to arrive in Israel on Monday for talks with the Israeli prime minister, Benjamin Netanyahu, and the Palestinian president, Mahmoud Abbas, on Tuesday.

Haaretz reports that the White House conversation with President Abbas has – or should have – upset the Israeli right.

One of the key issues to be discussed is reportedly guidelines for Israeli settlement construction in the occupied Palestinian territories, which Greenblatt has said in the past he does not regard as an obstacle to peace, though he supports a two-state solution.

Trump has offered confusing and conflicting views on the Israeli-Palestinian question, both as candidate and president, including suggesting at a press conference with Netanyahu that he was not necessarily committed to a two-state solution. He also promised to move the US embassy from Tel Aviv to Jerusalem, a move that has yet to materialize. Palestinian officials, including Abbas in his conversation with Trump on Friday, have insisted they see the establishment of a Palestinian state alongside Israel as the only option for peace.

How could Donald Trump pull off a two-state solution? How might he get the two sides to agree to a peace agreement? He COULD put an embassy in both sections of Jerusalem – west and east. A US embassy in West Jerusalem would validate and establish Israel’s right to all of Jerusalem. But embassies in both territories will be tantamount to dividing the city. YHVH will not be happy if that happens.

In the meantime, Netanyahu is appeasing Trump by asking permission to build a settlement. Ostensibly, Netanyahu will tell Trump it is a replacement community, not a new settlement.

The Jews may find that Cyrus Trump is not such a “messiah” figure after all and that his policies will entrench them further into trouble.