TENSIONS BETWEEN NORTH KOREA AND US ESCALATE 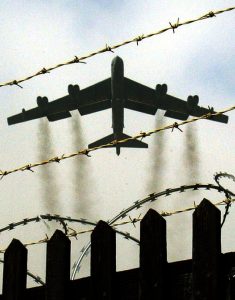 North Korea warned the United States on Tuesday of “merciless” attacks if an aircraft carrier strike group led by the USS Carl Vinson, which is joining South Korean forces for exercises, infringes on its sovereignty or dignity.

Compounding the regional tension is China’s opposition to the deployment of an advanced U.S. anti-missile system in South Korea. The United States and South Korea say the Terminal High Altitude Area Defense anti-missile system is for defense against North Korea, but China fears its powerful radar can probe deep into its territory and compromise its security.

Pyongyang is possibly preparing for another nuclear missile test. According to the Chicago Tribune, “Pyongyang’s fifth and latest nuclear weapons test occurred on Sept. 9 on the 68th anniversary of North Korea’s founding. Seismic monitoring stations picked up vibrations from the underground blast and quickly determined that this one was exceptional.

Scientific analyses of the test determined that the new bomb’s explosive yield approached 30 kilotons, two times the force of the “Little Boy” bomb dropped on Hiroshima, Japan, in 1945. The device was twice as powerful as the bomb North Korea tested just nine months earlier, and it was 30 times stronger than one detonated in 2006 in a remote mountain tunnel. More ominously, North Korea last March displayed a new compact bomb, one that appears small enough to fit inside the nose cone of one of its indigenously produced missiles.”

President Donald Trump is sending B-1 and B-52 bombers to Korea. Some 300,000 South Korean and 15,000 U.S. troops have begun their annual Foal Eagle joint war exercises that run through April. “The two sides are like two accelerating trains coming toward each other with neither side willing to give way,’’ says Chinese Foreign Minister Wang Yi, “Are (they) really ready for a head-on collision?’’ So it would seem.

Business Insider reported that the SEAL 6 team is training for a decapitation strike to remove North Korea’s leadership. The press insists on telling the enemy what the US is preparing for.

Trump really wants Iran defeated, and understands Syria is where their dreams of absolute Persian hegemony over the Arabs and their oil can be defeated. AKA, with Trump, the gloves are off when it comes to defeating Iran, and defeating it badly.  Militarily, ISIS is really the easy problem.  It’s Iran that’s the more difficult strategic puzzle to solve. To this end, Trump has increased the US military presence in Syria.

U.S. officials on Wednesday said the Trump administration could base up to 1,000 U.S. troops in Kuwait to serve as a fast-reaction reserve force in the battle against IS — a move that strongly suggests Trump is prepared to substantially raise the stakes in Syria after years of half-hearted U.S. involvement.

Last week, US Army Rangers drove around the Syrian town of Manbij with the American flags flying high. They were sending a message to all the armies that are gathered around that they would not like to see any ‘accidental’ bombing of their positions. The message was heard loud and clear. It came just as US President Donald Trump’s government announced that the United States would send hundreds of US Marines into northern Syria as part of the impending battle against the city of Raqqa, where the Islamic State has control.

The US is also training and working alongside the Syrian Democratic Forces – a largely Syrian Kurdish group – that has made significant gains against ISIS in northern Syria. Both “the Turkish and US governments define as a terrorist group, the PKK (Kurdish Workers’ Party). The Turkish government is loath to allow the Syrian Democratic Forces, which they see as a proxy of the PKK, to take Raqqa even though the United States has fully backed this operation. For the Turks, such an outcome would be catastrophic”.

Turkey is angry over the increase in US troop strength and how closely the US is working with the Syrian Democratic Forces. These U.S. actions have height­ened tensions with Turkey, a NATO partner and nominal ally, and sharply exposed the increasingly complex geopolitical rivalries that have emerged in northern Syria.

The Trump administration’s decision to add more ground troops to Syria’s seething cauldron is likely to scuttle United Nations peace talks. It could also be the most toxic of many blows President Donald Trump has dealt himself since he entered the Oval Office. Syria’s President Bashar Al-Assad is none too pleased, either, and has begun calling US troops in Syria ‘invaders’.

“Multiple experts with deep experience with Russia and Syria are also worried about the Trump team’s planning process for future Middle East unrest, particularly amid the president’s stated intent to slash the budgets of State and the humanitarian U.S. Agency for International Development to pay for a proposed $54 billion increase to defense spending, all at a time when Secretary of State Rex Tillerson still doesn’t have a deputy or top aides to inform the counsel he would offer to Trump.

Trump’s national security team is not considering any increase in cooperation with Russia against the Islamic State group in Syria, according to multiple current advisers and former officials who have seen a plan the Pentagon delivered to the White House last month to hasten the defeat of the terrorist network.”

While Trump tries the “back door” approach to destroying Iran, the Persians are making their own moves. Iran has repeatedly attacked or threatened the US, the UK and their Middle Eastern allies over the past few weeks.

Most people likely won’t understand that Iran and North Korea are probably working in concert against the US and escalating the world right into a big ‘ol fight! The other thing most Americans, who believe Trump is a “messiah” figure, won’t understand is just how much like Cyrus Trump really is. Cyrus was a man of war until the day he died. Trump appears to be doing well following in Cyrus’s example.