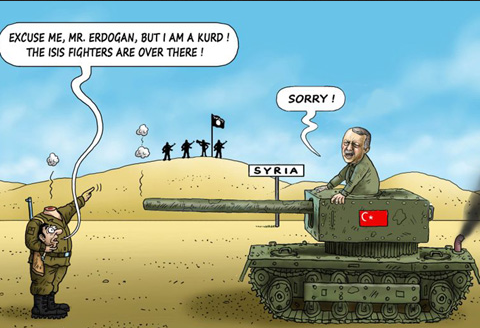 Recently Turkish President Recep Tayyip Erdogan announced his readiness to conduct a new military operation in the north of Syria to prevent the emergence of a Kurdish state there.
Turkey has already confirmed its seriousness on this issue by the recent air strikes carried out by Ankara at the positions of the Kurds and by continued armed clashes between the opposition sides. Moreover, Turkey has redeployed some of its armored units in the area of Azaz settlement.
In this regard, the Kurdish officials urged Assad and his partners to protect them from external threats.
According to the Syrian expert Ziad Shibli, the Syrian Kurds can face the Turkish aggression all alone due to some objective causes.
In fact, Kurds continue playing a double game in their own interests. By playing along with the U.S., the Kurdish authorities do their best to break ties with the Syrian government and its allies. They have sold their loyalty for arms supplies. Particularly, the Pentagon delivered more than 100 trucks loaded with weapons including 12,000 rifles, 10,000 machine guns, 4,000 grenade launchers and 300 mortars only for the past week.
However these weapons are used not for fighting ISIS. It’s not a secret that the Kurdish formations let terrorists flee from besieged Raqqa to strengthen their positions in Palmyra and Deir ez-Zor. Later these facts were confirmed by al-Arabiya. The channel also announced that Raqqa Civilian Council’ established by Kurds under the support of the U.S. amnestied dozens ISIS-terrorists.
Obviously, the actions of the Kurdish formations contradict the interests of Damascus and its main ally in fighting terrorism, Russia.
According to the Russian media, SDF-leaders ignored Russian military advisers who had persuaded the Syrian High Command to use its units to protect the Kurdish enclaves near Afrin and Manbij. But collaborating with the U.S. Kurds rose against the SAA.
Yet, just after a threat of direct clashes with Turkey appeared, SDF-leaders started thinking about the assistance of Damascus and Russian AF. Clearly, Kurds realize that they shouldn’t rely on the U.S. help in this issue. Unlikely, Washington will be against its NATO ally. If the contradictions on the Kurdish issue between Turkey and the U.S. get worse Ankara would ban using the Incirlik Air Base by the U.S. military.
Nobody likes traitors. Apparently, Kurds will stay alone with Turkish armed forces. Neither Damascus nor Moscow will provide any assistance to them. And only Kurdish leaders are responsible for that.