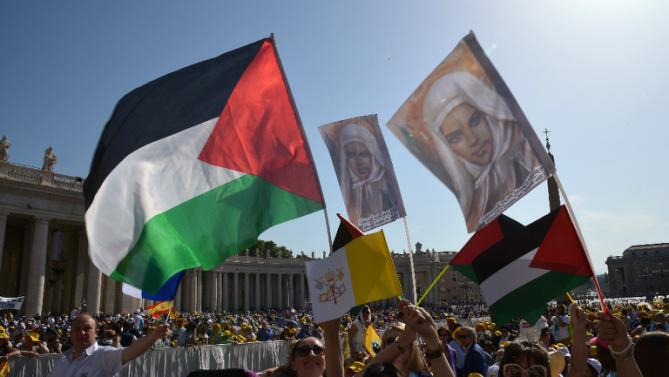 On Saturday, Palestinian Authority Chairman Mahmoud Abbas met with Pope Francis at the Vatican and inaugurated the Palestinian Authority (PA) embassy there. As he was raising the black, red, white and green flag, Abbas called on the world’s leaders to recognize the State of Palestine when they get together in Paris on Sunday.

Read the full concluding statement from the Paris peace conference, which ended Sunday evening. The statement was agreed on unanimously following intense negotiations and is considered less harsh than a draft leaked to Haaretz last week.

rance warned Sunday of “serious consequences” if Donald Trump moves to recognize Jerusalem as Israel’s capital, while representatives from 70 countries met in Paris to try to revive stalled Israeli-Palestinian peace efforts. Neither Israel nor the Palestinians are represented at the conference, which Israeli Prime Minister Benjamin Netanyahu dismissed as “futile.” Opening the meeting, French Foreign Minister Jean-Marc Ayrault said the international community wanted to “forcefully reiterate that the two-state solution is the only solution possible” to the seven-decade-old conflict. He also warned the US president-elect against relocating the American embassy from Tel Aviv to Jerusalem, in a move to recognize the contested city as Israel’s capital.

As viewers watched her live online, Katelyn Nicole Davis filmed herself as she claimed that she had been a victim of sexual abuse by a family member. Then she took her own life. The youngster used a livestreaming app which allowed her to broadcast herself using her mobile phone. But following her death, the video of her suicide went viral after it was copied from the feed on Live.me, a social media app similar to Facebook Live, and duplicated. The full 42-minute video of the girl preparing for and carrying out her suicide was available on YouTube and Facebook for several days but were removed when both companies were contacted by The Independent.