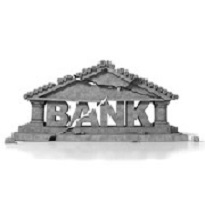 The world and US economies are both in trouble, but the global economy is in worse condition.

The biggest bank in Europe is in the process of imploding, and there are persistent rumors that the final collapse could happen sooner rather than later. Deutsche Bank is rapidly bleeding cash, they have been laying off thousands of workers, and the vultures have been circling as company executives desperately try to implement a turnaround plan. If Deutsche Bank goes down, it will be even more catastrophic for the global financial system than the collapse of Lehman Brothers was in 2008.

Deutsche Bank is the largest domino in Europe’s very shaky financial system. When it fully collapses, it will set off a chain reaction that nobody is going to be able to stop.

A Chinese Bank is on the verge of collapse. ZeroHedge reports that Baoshang Bank, Bank of Jinzhou failed and then Heng Feng Bank with 1.4 trillion yuan in assets, quietly failed and were just as quietly nationalized. But a fourth prominent Chinese bank was on the verge of collapse under the weight of its bad loans, only this time the failure was far less quiet, as depositors of the rural lender swarmed the bank’s retail outlets, demanding their money in an angry demonstration of what Beijing is terrified of the most: a bank run.

Tyler Durden says “bad news is that small banks are just the start of a wave that could eventually topple some of China’s biggest SOEs (State-owned enterprise).

India’s banks may be starting into trouble. A Reserve Bank of India report estimated that the failure of the largest NBFCs or housing finance companies could cause defaults in up to two banks, according to FT.com.

“It’s only a matter of time, if things are not resolved, that we’ll start to see bigger defaults in the sector,” said Saswata Guha, Fitch’s head of financial institutions in India. “There’s a risk of contagion which may flow through [NBFCs] and also banks. It’s very hard to say how this will unravel.”

Here is the kicker. Listen to what has to say: Some say the problems in India’s financial companies, many of which lent heavily to real estate, echo the collapse of the housing bubble that contributed to the 2008 US financial crisis.

“You could almost take the Big Short, change the American names to Indian names, change Wall Street to Dalal Street, and you have got the best description of the NBFC crisis in our country,” said Saurabh Mukherjea, founder of Marcellus Investment Managers.

Huh! India has been used as test ground for many things for decades ranging from drug testing to testing of people’s patience for being pushed to far to the medical hazards of US chemical plants in Indian citizen’s back yards. Now we find out that India’s economy is structured to test how the US economy will respond to various market conditions.

US banks also face an uncertain future in coming years. An astonishing 50% of US commercial banks could be gone in the coming years — a huge loss of over 3,000 FDIC-insured institutions.

Banks in the US and worldwide are “not remotely” in a good place [and] …the smaller US banks could disappear in a harsh wave of bank consolidations and failures.

In fact, there were 3 bank failures this past week plus another earlier in the year. More on this in a minute.

McKinsey & Co., in a recent report, said almost 60% of banks in the US and worldwide could be wiped out in an economic downturn because of their low return on equity as well as technology challenges.

US farm foreclosures alone were up 24% in the 12 months ending September 2019.

US consumer confidence is dwindling. TheHill.com says, A majority of respondents in a new poll said they expect the U.S. economy to enter a recession within the next year, despite a strong job market and steady consumer spending.

CNN says, Recession fears are on the rise in the United States. Memories of the last downturn are exacerbating these worries: The last time America faced a recession was in 2008, as the financial crisis was unfolding. Millions of people lost their jobs, GDP growth plummeted and businesses shut down.

But not all recessions are like that. Sometimes the economy can grow all the way through a recession. In fact, some economists believe the world is in a recession now and most people don’t even realize it.

Things in Europe appear to be much more bleak, and the odds for a recession there are much higher.

But FoxBusiness.com says the chance of a coming recession is dwindling. The U.S. economy looks like it could skirt what would be its first recession since the 2008 global financial crisis.

“It looks like the recession has been delayed for now,” Torsten Slok, chief economist at Deutsche Bank Securities, told FOX Business, adding that the steepening of the yield curve is telling us the chances of a recession are “lower than what it was just a few months ago.”

Even if a recession comes down the pike, it is unlikely to be deep.

The experts disagree all the time, but there is a major factor from the 2008-2017 banking sector that drove the downturn: Bank changes, branch closures and outright bank failures.

In the US economy, a big Bank is making big changes. U.S. Bank recently told said job cuts are coming.

It’s the latest move by U.S. Bank to adjust to a world were fewer customers actually walk into branches to do their banking and instead rely on online or app-based services. The Bank expects to close somewhere between 10 to 15 percent of its roughly 3,050 branches systemwide in the coming years.

Other banks are closing branches, too. San Francisco-based Wells Fargo & Co. has closed hundreds of branches. Wayzata-based TCF Financial Corp. has closed about 100 branches over the past five years.

U.S. Bank has said the closings wouldn’t mean the exit from any markets. In fact, it’s expanding its footprint into places like Charlotte, N.C., where it plans to add 10 branches by the end of 2020.

According to BizJournal.com, Colorado has seen 127 bank branches close in 5 years. This is a subscription-only news site, so I do not have any further details.

Three smaller bank failures occurred this week. According to this FDIC list, It has been 2 years since a bank failed.

The facts of the closures are available only at BankingDive.com, which says, Industrial Bank of Washington, D.C., agreed to buy City National’s assets and assume all of the bank’s deposits.

The Kentucky bank was shuttered one day and reopened the next because the Kentucky Farmers Bank of Catlettsburg took over its operations.

Enloe’s failure in May stemmed from insider abuse and fraud by the bank’s former officers.

Legend Bancorp in Bowie, Texas, bought all of Enloe’s insured deposits but only 14% of the bank’s assets.

The failure of 3 small banks in the US in a very short period of time could herald the start of something bigger given that 1) Zerohedge’s Tyler Durden explains that the 4 bank failures in China’s huge economy could be the start of some dire banking problems in China, and 2) the Deutsche and other large and central banks are struggling to keep from failing.

The problems with both the US and Chinese banks is that they failed due to bad loans or undercapitalization.

Perhaps this is nothing but a blip as the AmericanBanker.com article suggests. Without paying $208 to find out, we will have to wait until someone with a bigger budget than mine can afford to look into it and let us know, eh?

Other news of interest to those following the stupidity of the Democrats: The Democrat-controlled House of Representatives has voted to fund efforts to “enhance the border security” of Jordan, Lebanon, Egypt and Tunisia while moving to deny all funding to build walls, fencing or any other structures to enhance the border security of the United States.

To them, borders on the other side of the world are more important than [America’s] own.