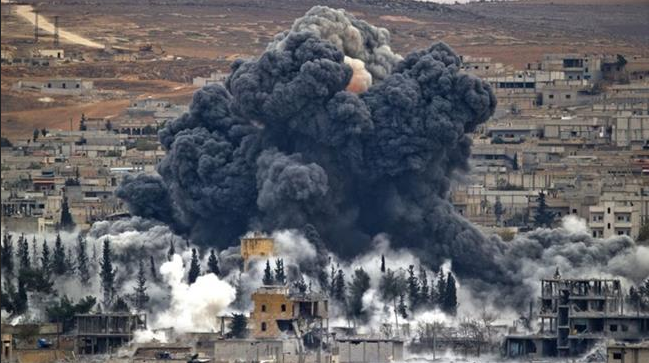 On May 18, the moving convoy of the Syrian pro-government forces consisted of militias was hit by a massive airstrike of the U.S.-led international coalition. The accident occurred at the Syrian-Jordanian border near the settlement of At-Tanfa.

As reported by the official representative of the U.S. Central command Josh Jakes, the Pentagon did not have any information about the number of casualties as a result of the airstrike.

It is worth noting that the U.S. has previously hit the pro-government forces in Syria. For example, during Obama’s presidency the Syrian army positions in Deir ez-Zor were attacked by ISIS terrorists right after the United States had launched their own airstrike. According to the US officials that attack was a mistake caused by “the human factor”.

In April the U.S. Navy has already bombed Syria’s Shayrat Air Base, in response allegedly to the Khan Shaykhun chemical attack.

So, what’s the true reason of such aggressive actions of the US-led international coalition this time? A number of Syrian military analysts believe that the U.S. Air Force main task was to hamper Syrian pro-government forces and to slow down their further advance towards Deir ez-Zor rather than to ‘protect’ U.S. ‘partners’.

Their actions are motivated by the fact that the Syrian military command is ready for a large-scale military operation to liberate the city from ISIS. Damascus sees the complete liberation of Deir ez-Zor province from the blockade as the restoration of the control over the largest oil fields. This may significantly improve the economic situation in the country.

This Syrian city is also a tasty little deal for the coalition forces. The overwhelming desire of the West to plunge the country into a state of constant chaos is the main reason for the planned seizure of oil rigs.

The Syrian city was samely a kind of dainty bit for the US-led coalition. The irresistible impulse of the West to drive the country into the permanent chaos is the primary reason for the oil derricks seizure.

Furthermore, the air strike was performed amid the ongoing Syrian talks in Geneva. A show of power like that may have targeted at making the talks even more difficult and troublesome as they are.

Apparently, the US-led coalition’s regular strikes on the pro-government troops in Syria testify that Washington intends to continue its double-standard policy towards the Syrian conflict. We remember how they supported the establishing “de-escalation” zones but now their actions indicate the opposite. It is sheer cynicism to strike against those who really fight ISIS terrorists. But this doesn’t come as a surprise either in Syria or in the world.