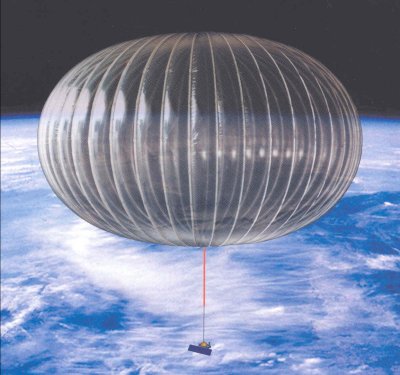 Teams across the US are sending approximately 75 balloons equipped with cameras and trackers over 80,000 feet in the air. Over 30 of the balloons will also carry a highly resilient strain of bacteria called Paenibacillus xerothermodurans attached to aluminum “coupons.” Scientists are hoping to discover how the bacteria will react in the surface atmosphere on Mars.

Solar eclipse to be live-streamed from BALLOONS soaring 80,000 feet above Earth’s surface

Millions of Americans sit in some of the ‘worst traffic jams in history’, flock to Burning Man-style festivals and fill camp grounds at 21 national parks ahead of TODAY’S once-in-a-lifetime celestial event

The sight of the moon’s shadow passing directly in front of the sun, blotting out all but the halo-like solar corona, may draw the largest live audience for a celestial event in human history. When those watching via broadcast and online media are factored into the mix, the spectacle will likely smash records.

‘It will certainly be the most observed total eclipse in history,’ astronomer Rick Fienberg of the American Astronomical Society (AAS) said last week.

Beware the Women of ISIS: There Are Many, and They May Be More Dangerous Than the Men

As police tracked down the members of the cell that brought terror to Spain on Thursday, the names that surfaced were once again, predictably, all men, and mostly young ones. That’s the classic pattern with jihadis. But many counterterrorism experts see a new threat rising—what French criminologist Alain Bauer calls “the feminization” of the so-called Islamic State, which is under siege in the Middle East and looking to intensify its campaign of gruesome retaliation in the West.

The Business Behind the Left’s Pay-to-Protest Scheme

When left-wing organizers were recruiting people to travel to Washington, D.C., to try to “shut down the inauguration of Donald Trump” and “paralyze the city itself,” they offered a number of incentives — free housing, food, and also legal assistance in case of arrest. They also organized training camps, workshops and media-encounter events in the run-up to the main event: the big riot.

DAVE HODGES “The Common Sense Show”: These heinous acts to be unleashed against the American people

Jade Helm 16, aka UWEX 16 trained foreign soldiers in the art of citizen extraction, torture and murder. Most importantly, Jade Helm 16 trained to fight against “rogue” military forces fighting a “guerrilla” war. There were four bases in Texas that participated in these heinous acts to be unleashed against the American people. Was Mike Adams correct when he said will America’s streets run red with blood?

WAKE UP, people! Alt-Left and Alt-Right are run by the same forces… the goal is “divide and conquer”

The Quorn brand now has competition from Impossible Foods and its meatless, “bleeding” burger. Contrary to lab grown meat (which may hit the U.S. market as early as next year), this meat substitute contains a mix of soy, wheat, coconut oil, potatoes and “heme,” the latter of which is derived from genetically engineered yeast.