On Monday, Amazon Go, the company’s new cashier-less mini-market opened in downtown Seattle, showing the world what retail shopping in the future could look like.

Instead of human cashiers managing checkout lines and registers, Amazon Go has automated the checkout process with sensors backed by machine learning that are watching you pick up and put away that can of soda. After swiping into the store through the company’s app, shoppers are free to take items off the shelf and leave the store without needing to take out their wallets, because the app can bill you and send a virtual receipt.

Human employees are still used to stock shelves and prepare fresh meals, but without humans monitoring your purchases, is it possible to steal something? Some shoppers said the checkout process felt like “shoplifting.” Several journalists and shoppers attempted to try to trick Amazon’s sensors unsuccessfully. One journalist tried to trick the camera system by hiding his purchase in a bag under his arm, and still got charged for it. One shopper tried quickly swiping soda off the shelf, but the sensors still caught the choice and he got charged for it.

However, one CNBC reporter, Deirdre Bosa, said she was able to leave the Amazon Go store without being charged for a cup of Siggi’s yogurt. 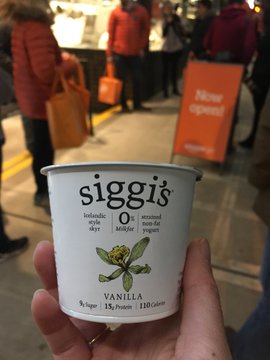 VP of Amazon Go Gianna Puerin told Bosa to “enjoy the yogurt on us,” calling the incident a “rare occasion” that “happens so rarely that we didn’t even bother building in a feature for customers to tell us it happened.” Amazon Go is so confident in the power of its cameras and sensors that it doubts shoppers can pull off more than the rare yogurt heist and the company has built no safeguard against it.