An Israeli security official has confirmed overnight airstrikes in Syria, saying the air force had hit a series of targets involved in Iranian arms transfers to the Hezbollah militant group (The Associated Press), 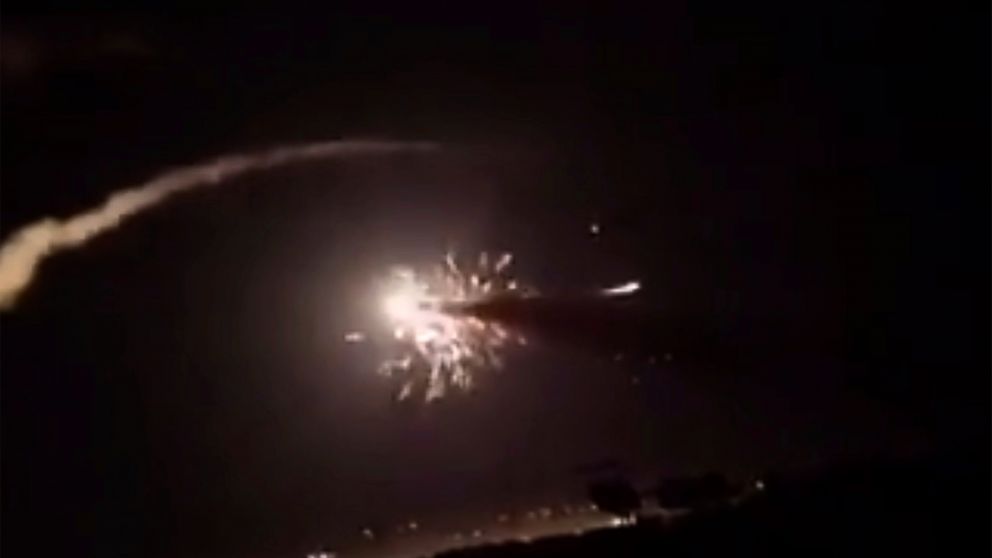 This frame grab from a video provided by the Syrian official news agency SANA shows missiles flying into the sky near Damascus, Syria, Tuesday, Dec. 25, 2018.

Israeli warplanes flying over Lebanon fired missiles toward areas near the Syrian capital of Damascus late Tuesday, hitting an arms depot and wounding three soldiers, Syrian state media reported, saying that most of the missiles were shot down by air defense units.

An Israeli security official on Wednesday confirmed responsibility for overnight airstrikes in Syria, saying the air force had hit a series of targets involved in Iranian arms transfers to the Hezbollah militant group.

Russia had criticized the airstrike, saying it endangered civilian flights. The comments highlighted the increasingly tense relations between Israel and Russia, which have grown strained since the September downing of a Russian plane by Syrian forces responding to another Israeli raid. The Israeli official said the air force had attacked several Iranian targets in three main locations late Tuesday and early Wednesday. He said the targets were primarily storage and logistics facilities used by archenemy Iran to ship weapons to Hezbollah, an Iranian-backed Lebanese group that fought Israel in a 2006 war.

He said Israel also destroyed a Syrian anti-aircraft battery that fired at the Israeli planes, and claimed that Iranian forces are operating less than 80 kilometers (50 miles) from the Israeli border, contrary to Russian assurances.The official spoke on condition of anonymity