There’s another hurricane set to strike America. It could strike on 9/11. Maybe that will be an anniversary present for the United States. More than that, it is probably a wake up call to Americans! We can get a hint about YHVH’s message behind, or within, the storms Harvey and Irma by looking at the meanings of their names.

Now let’s look at Irma. Latin and American meanings: Noble. The German meaning is different, however.  Irma, in German, is derived from the ancient war goddess, ‘Irmin’.

The German short form of the name begins with the Germanic element ermen, which meant “whole, universal“. It is thus related to EMMA. It began to be regularly used in the English-speaking world in the 19th century.

President Donald Drumpf… errrr… I mean Trump is German, so let’s go with the German meaning of ‘Irma’, ok?

The universe IS YHVH. YHVH IS the universe. He created it and permeates and it seems that He is bringing all of His guns blazing against America right now, but why?

First, President Trump made a most terrible deal that allows Russian, Iranian, Pro-Iranian troops on Israel’s border 10km from Golan. A week after Netanyahu practically begged President Putin to pull back those enemy troops, Putin sent into Syria another 1,000 Iranian troops to “refresh” the other ‘poor, tired’ Iranian troops who have been fighting so long. 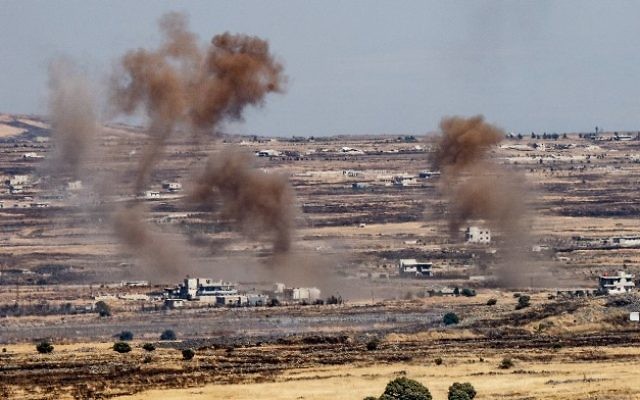 This week, the U.S. said it agrees with Russian policy about keeping Israel’s enemies on its border.

Citing unnamed Western diplomatic sources, the Arabic daily Asharq Al Awsat report said a US team that was holding talks with their Russian counterparts in Amman, Jordan, to discuss the nationality of observer forces overseeing a July truce,  backed down on some of their initial demands.

The report said the US  agreed that Iranian-backed militias could be positioned as close as 8-16 kilometers (five to ten miles) from the Jordanian border and the Golan Heights, less than half the originally sought 32 kilometers (20 miles) distance.

Donald Drumpf just endangered Jordan along with Israel. Hey! That’s what the Book of Daniel says! The King of the North will attack Israel and Jordan. Well… I’ll be! Here it is. Clear as day. The King of the North, that new 4+1 coalition – Iran, Iran, Syria, Lebanon funded by Russia – are now sitting, poised to attack at will!

But, you see, Gog (from the land of Magog) will become a complicating factor for the King of the North.

President Trump is trying to draw fire away from Israel and Jordan by escalating the war in Afghanistan, another of the many proxy wars between the U.S. and Russia. The problem is that Russia ain’t takin’ the bait! One day, Trump will awaken to realize what a stupid move he’s made and he will do what Ezekiel 38:7 tells him to do: Be a guard for Israel.

Isa 7:5 Aram, Ephraim, and Remaliah’s son have plotted this evil against you:
Isa 7:6 “Let’s go attack Judah, let’s terrorize it, and let’s conquer it for ourselves. Then we’ll install Tabeel’s son as king!”‘
Isa 7:7 ‘But this is what the Lord GOD has to say: “‘It won’t take place. It won’t ever happen.
Isa 7:8 Because Aram’s head is Damascus, and Rezin is its king, within sixty-five years Ephraim will be shattered as a people.

When that happens, Israel will become THE battleground between Gog, the U.S. and their allies, and the 4+1 coalition, the King of the North. Gog, as prophesied will lose that battle and the war altogether. The U.S. / NATO alliance will fall apart making it easy for the Russians and Iranians to wipe them out.

Eze 39:1 “Now as for you, Son of Man, prophesy against Gog and tell him, ‘”This is what the Lord GOD has to say: ‘Watch out, Gog, you leader of the head of Meshech and Tubal!
Eze 39:2 I’m going to turn you around, drag you along to your destruction, and bring you up from the farthest parts of the north, and carry you to the mountains of Israel.
Eze 39:3 There I will strike your bow from your left hand and your arrows from your right, causing your fall.
Eze 39:4 You will collapse on the mountains of Israel, along with all of your soldiers and the nations that have accompanied you. There the raptors, vultures, and wild animals will feed on you.

What does all of that have to do with two huge hurricanes striking America? They are a warning from YHVH! For the stupidity of an American President, the country could be lost!