According to Inside Syria Media Center, President Bashar al-Assad held on Thursday a summit meeting with Russian President Vladimir Putin in Sochi during which talks dealt with the distinguished bilateral relations between Syria and Russia and means of boosting regional and international security and stability. 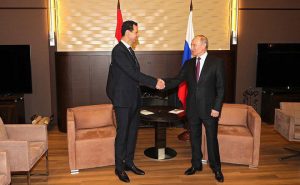 During the meeting which was held in the presence of Russian senior military officers and officials, intensive talks were held about the fruitful cooperation in the field of combating international terrorism and the progress achieved as a result of this cooperation in the eradication of terrorism in Syria.

The two presidents also discussed steps of the political solution in addition to the positive role played by Federal Russia in this domain.

At the beginning of the summit meeting, the two presidents made the following press statement;

President Putin said “Mr. President, I am very happy to receive you in Russia, and first of all I congratulate you on the coming of the holy month of Ramadan and congratulate you on the great successes achieved by the Syrian Arab army in the fight against terrorism. And due to the efforts of the Syrian soldiers, very important steps were gained during the latest period in order to boost the legislative authority in the country where terrorists were expelled from important regions in Syria, which paved the way to start reconstructing infrastructure in the country after expelling terrorists and putting an end to the threat against Damascus.”

President Putin added that due to those military successes, additional and suitable conditions have been created to resume the political process track and a great progress was achieved in the framework of Astana process, another progress was gained during the Syrian national dialogue congress which was convened in Sochi.

“And now we can adopt the forthcoming steps in a joint form as the aspired goal is to reconstruct economy and offer humanitarian aid to people in need,” said President Putin.

He went on to say “As you know, we are in contact with all sides concerned in this complicated process including the UN and its envoy de Mistura, and I wish to discuss with you all these directions for our joint work and I welcome you.”

“I am happy to meet again in Sochi after several months of our last meeting here, in fact, a lot of positive changes have been done between these two meetings, particularly regarding combating terrorism as the area of terrorists has become more smaller and during the latest weeks, hundreds of thousands of Syrians have returned to their homes and there are millions on their way to return and this means more stability, and this stability forms a broad door for the political process which has started since several years,” President al-Assad said. 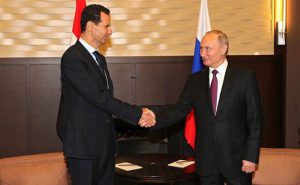 The President added “of course, as we have announced previously, we announce here once again that we always supported, and we have a lot of enthusiasm for this process because it is necessary in parallel with combating terrorism… and we know that this issue will not be simple as there are countries that have no desire to see this stability as completed in Syria, nevertheless, we, and you, and the partners in the peace process will continue, with the same power, in order to achieve peace.. And today’s meeting is an opportunity to put a common view for the forthcoming period in regards to peace talks, whether in Astana or in Sochi.”

“Once again, I thank you, and avail the opportunity to thank the Russian military forces, in particular, the air forces, which played an important role in combating terrorism,” President al-Assad said.

At the end of the talks, President Putin gave a press statement saying “During the meeting that we held today, we have discussed the coming joint efforts concerning the continuation of combating terrorism in Syria and tackled that successes and victories achieved by the Syrian Arab army in its war against terrorism and restoring stability to the country.”

“In this regard, President al-Assad affirmed that he will send a list that includes the names of candidates to the membership of the committee on discussing constitution in the list of the Syrian government as soon as possible to the UN, and Russia welcomed this decision and supports it,” President Putin added.

He went on to say “We affirm that with the achievement of the big victories and the remarkable successes by the Syrian Arab army in the fight against terrorism and with the activation of the political process, it is necessary for all foreign forces to withdraw from the Syrian Arab Republic territories.”

President al-Assad, for his part, said “our meeting today was very fruitful as we evaluated, in the beginning, the military situation and the evaluation was positive in regards to what has been achieved in the process of combating terrorism, particularly the impact of these military operations on returning the situation to normal, so, returning the citizens to their homes.”

“I wish to thank President Putin and the Russian government which continued, during the phases of the crisis, offering the humanitarian aid to the Syrian citizens who have left different regions because of terrorism,” President al-Assad said.

The President went on to say that “we also discussed economic cooperation, particularly the increasing investments of the Russian companies in Syria lately and the possible steps to push more companies to invest in Syria and take part in reconstruction process.”

“We have also evaluated the political process during the latest months, particularly after Sochi conference,” the President said.