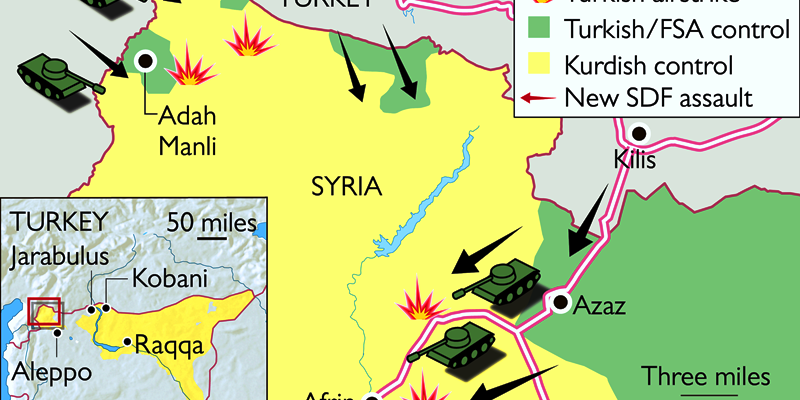 After the Turkish Air Forces hit Kurdish positions in Syria’s Afrin, the General Staff of the Turkish armed forces on Saturday announced it launched ‘Operation Olive Branch’ against the PYD/PKK troops.
The next day, the Turkish command reported that aircraft had hit 153 Kurdish militant targets, including “shelters and arsenals.” In addition, according to Hürriyet Daily News, the Turkish Air Force conducted massive air strikes on the Menagh Military Air Base, which the U.S. repeatedly had used to supply weapons and ammunition to Kurdish formations.
According to Reiters, the Pentagon has intensified military training of the Syrian Border Security Forces (BSF) along the border areas. It will become a basis of the new Syrian Kurd’s army.
While continue supplying them weapons what will the White House use BSF for in the unfolding situation? It seems the U.S. keep on pursuing insidious policy putting pressure on its NATO ally, Turkey. Washington realizes that Ankara is getting out of control and a robust military fist along the borderline will only assist Erdogan. U.S. support for the SDF has put enormous strain on ties with NATO ally Turkey, which views the YPG as an extension of the Kurdistan Workers’ Party (PKK) – a group that has waged a three-decade insurgency in Turkey and is considered a terrorist group by the European Union, Turkey and the United States.
It is possible to say with confidence that this confrontation between the U.S. and Turkey could have catastrophic consequences for the parties involved and especially for Kurds, not to mention the whole region.