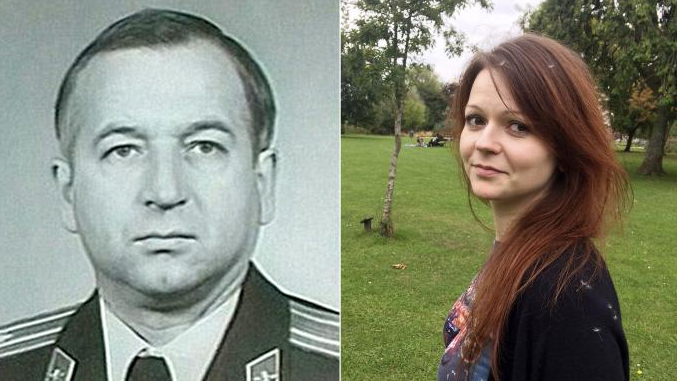 According to Information Liberation, it seems that the ‘Novichok’ fairy-tale the British government plays to us provides for a happy ending – the astonishing and mysterious resurrection of the victims of a “military grade” “five to eight times more deadly than VX gas” “nerve agent” “of a type developed by” Hollywood.

The condition of Yulia Skripal, who was poisoned with a nerve agent in Salisbury along with her father, is improving rapidly, doctors have said. Salisbury NHS foundation trust said on Thursday the 33-year-old was no longer in a critical condition, describing her medical state as stable.

Christine Blanshard, medical director for Salisbury district hospital, said: “I’m pleased to be able to report an improvement in the condition of Yulia Skripal. She has responded well to treatment but continues to receive expert clinical care 24 hours a day.”
…
Her father’s condition is still described by the hospital as critical but stable.

Only yesterday the Skripals chances to survive was claimed to be 1 out of 99. Nerve agents are deadly weapons. A dose of ten milligram of the U.S. developed VX nerve agent will kill 50% of those exposed to it. The ‘Novichok’ agents are said to be several times more deadly than VX.

As I reported yesterday, despite British police saying they believe the Skripals were poisoned with Novichok put on their front door handle, they shopped for at least three hours and dined out before finally falling ill.

If the #Skripal victims were poisoned at their home they were not attacked with “a military grade nerve agent” or they wouldn’t have been able to walk drive switch off both their phones go to a pub go to a restaurant before falling ill in the park many hours after leaving home.

But was there really a nerve agent involved?

A doctor who administered first aid to Yulia Skripal for 30 minutes was not effected at all. The emergency services suspected the victims had received on overdose of fentanyl.

Doctor Steven Davies, who leads the emergency service of the Salisbury District Hospital, wrote in a letter to the London Times:

Sir, Further to your report “Poison exposure leaves almost 40 needing treatment”, (Mar 14), may I clarify that no patients have experienced symptoms of nerve agent poisoning in Salisbury and there have only been ever been three patients with significant poisoning.

A Court of Protection judgment about the Skripals issued on March 22 quotes as witness a Porton Down chemical and biological analyst:

Blood samples from Sergei Skripal and Yulia Skripal were analysed and the findings indicated exposure to a nerve agent or related compound. The samples tested positive for the presence of a Novichok class nerve agent or closely related agent.

“Indicated exposure” is a rather weak formulation. It means that no ‘novichok’ was found but decomposition products of something that may have been a nerve agent or not. A blood sample may “test positive” for all kinds of stuff but that does not say anything about the amount or about the lethality of any of the “positive tested” elements. The ‘Novichok’ nerve agents are organophosphates like many of the usual insecticides are. These break down relatively fast. A walk through a field freshly sprayed with some insecticide or the domestic use of such a product might leave similar decomposition products in the bloodstream as a nerve agent attack.

David B. Collum is Professor for Organic Chemistry at Cornell University. He really, really knows this stuff:

I will say it again: Anybody who tells you this nerve agent must have come from Russia is a liar–a complete and utter liar. They are simple compounds:https://t.co/Xk5rQz3xpz

MOA writes: “The Skripals are getting better. Good for them. But their resurrection from certain death is a further dint in the British government’s claim of ‘nerve agent’ ‘of a type developed by Russia.'”