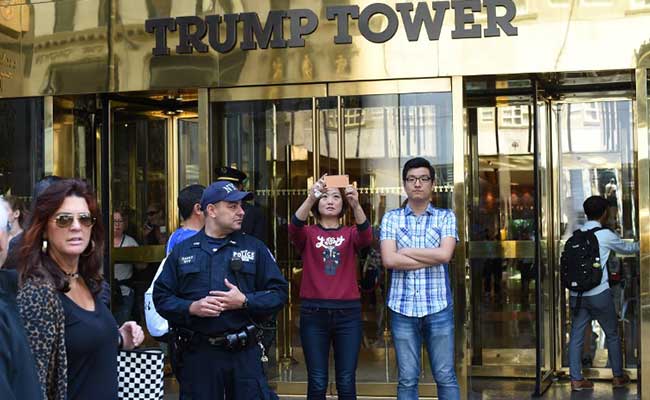 Donald Trump famously boasted that “I could stand in the middle of Fifth Avenue and shoot somebody and I wouldn’t lose any voters.” I wonder if that offer is good for a North Korean long-range missile hitting the same spot?I ask, because North Korea’s state media is now hinting that it will test a long-range missile capable of hitting New York – and trolling Donald Trump in the process.You may recall that back in January, some media outlets got the idea that North Korea might test an intercontinental-range ballistic missile (ICBM), prompting Trump to unleash a two-part Twitter tirade:”North Korea just stated that it is in the final stages of developing a nuclear weapon capable of reaching parts of the U.S. It won’t happen!””China has been taking out massive amounts of money & wealth from the U.S. in totally one-sided trade, but won’t help with North Korea. Nice”!North Korea’s reaction to the tweets was fairly muted at the time, though state media eventually released a statement suggesting it would test its missiles when Kim Jong Un pleased. A period of silence followed. In hindsight, it’s clear North Korea wasn’t backing down. North Korea just had a busy missile test plan for the 2017, and it wasn’t about to alter it just because some buffoon was hate-tapping ill-tempered tweets.Over the course of 2017, North Korea has been working its way through flight tests for all the new missiles shown off in the April 15 military parade to commemorate Kim Il Sung’s birthday. So far, North Korea has tested a new land-based variant of its solid-fueled medium-range ballistic missile, a new intermediate-range ballistic missile, a short-range Scud modified for greatly improved accuracy, and most recently an anti-ship cruise missile. According to the database of tests compiled by my colleagues, North Korea has been popping off a missile launch about once a week.At this brisk pace, the Democratic People’s Republic of Korea has checked off all the new missiles displayed in the parade except for two: the apparent ICBMs displayed at the end.As if on cue, North Korea has now turned back to Donald Trump’s tweet. Last week, North Korea’s Rodong Sinmun newspaper carried an article that noted:”Trump blustered early this year that the DPRK’s final access to a nuclear weapon that can reach the U.S. mainland will never happen.”But the strategic weapons tests conducted by the DPRK clearly proved that the time of its ICBM test is not a long way off at all.”And, in case that wasn’t perfectly clear, the article also stated: “The DPRK is about 10,400 km far away from New York. But this is just not a long distance for its strike today.”North Korea wasn’t ready in January to test an ICBM. That now seems to have changed.What sort of ICBM is North Korea likely to launch? As I have noted elsewhere, most attention has focused on the missile that North Korea has been showing off since 2012, which the United States calls the KN-08. North Korea conducted a test of the KN-08’s engine last year. If the missile works – a fairly big if, to be honest – it would have the range to reach New York.But there is also the possibility of a surprise. North Korea showed off two different heavy vehicles carrying canisters large enough for an ICBM, sending the clear message that there are multiple ICBMs under development. Other options include an ICBM based on the new engine that powered the Hwasong-12 or a larger solid-fueled ballistic missile. Each of these would be a surprise, in the sense that it represents a capability North Korea has yet to demonstrate. But then again, there is a first time for everything.North Korea has said that the missile will “soar into the sky with dynamism” – although a first ICBM test is, more likely than not, likely to fail spectacularly. Rocket science is, after all, hard. But that first test will be a warning, a wake-up call that America’s long-running policy of attempting to scold the North Koreans into disarmament is at an end.The Rodong Sinmun commentary argued that Washington’s “hostile policy will end … when the DPRK conducts the test-fire of ICBM capable of precisely striking any place of the U.S. mainland.” While I don’t expect Trump’s level of hostility will decline, the phrase “hostile policy” is a North Korean term of art. And the Rodong Sinmun commentary is correct in a specific sense: North Korea’s test of an ICBM will complete the development of a nuclear arsenal with a defined strategic role. It is the final step in building an arsenal that can deter and, to use another term of art, repel an American invasion.If deterrence were to fail, and an invasion were underway, North Korea already plans the widespread use of nuclear weapons against U.S. forces in South Korea and Japan. U.S. officials have repeatedly said that such a threat is not credible: “Perhaps he’s got an enhanced capacity to conduct a nuclear attack” one U.S. official noted, “and then immediately die.” Or, as Trump told Philippine President Rodrigo Dutert

Source: North Korea Is About To Test A Missile That Can Reach Trump Tower