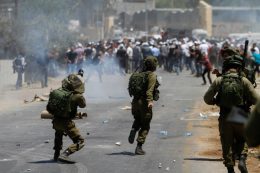 Fatah on Monday called for marches in the West Bank toward Israeli checkpoints in protest of the new measures and announced that Friday prayers, when many worshipers go to the Temple Mount, would be conducted in public squares instead. The decision was made following a meeting between Fatah Revolutionary Council secretary Adnan Ghaith, Fatah central committee member Jamal Muheisin, and Fatah representatives from the northern West Bank.

The group said the measures were called in order to denounce Israeli “terrorist procedures” in the Old City, according to a report in Ma’an.

That, of course, means that it is OK for Palestinians to commit murder! It’s just NOT OK for Israel to respond in any way, form or fashion!

It is OK, of course, for the Palestinians to do violence. And they do NOT want to be called terrorists! However, if A Jews even dares to speak out about the injustice done to them on Temple Mount that is what the Palestinians call terrorism!

Mike Pence says God had a hand in creating State of Israel, pledges to move embassy to Jerusalem

‘Indeed though Israel was built by human hands it is impossible not to sense that just beneath its history lies the hand of heaven,’ Pence said.

According to the Religion News Service (RNS), Pence thrilled his audience, quoting from the Prophet Ezekiel’s vision of the dry bones: ‘Ezekiel prophesied, and I quote, “behold I will cause breathe to enter into you and you shall live”.

US, RUSSIA TOUT ISRAEL’S SECURITY NEEDS AMID CONCERNS OF IRAN IN SYRIA

Both the US and Russia said on Monday that they understand Israel’s concerns about a future Iranian presence in Syria, as Israeli officials spoke about the possibility that Israel might need to take military action to prevent Tehran from setting up permanent bases, ports and arms factories in Syria and Lebanon.

The threats came a day after Prime Minister Benjamin Netanyahu told reporters in Paris that Israel was opposed to a cease-fire for southwestern Syria brokered by the US and Russia earlier this month, because it would allow a permanent Iranian presence in Syria, a distance of 20 kilometers from Israel’s border.

A war with Iran IS inevitable!

ISIS in the Sinai eyeing Israel

According to senior IDF officials, it is only a matter of time and strategic consideration before ISIS in the Sinai—which boasts hundreds of fighters—turns its attention towards Israel and aims to carry out a serious attack.

Conditions at Dr. Juan A. Rivero, a 45-acre zoo featuring over 300 species in the western coastal town of Mayaguez, have deteriorated so far as to catch the attention of the U.S. Department of Agriculture, which cited dozens of violations at the park in its most recent report from this spring.

They included a distressed cougar housed in a tiny enclosure; a lack of working fans for camels and deer exposed to tropical heat; expired food and medicines; and a tiger that inspectors said was underweight and had not had any medical exams or lab tests for two years.

Exodus From a Historic Puerto Rican Town, With No End in Sight

The push toward a cashless society is becoming more of a shove.  Before today I had never heard of “The Visa Cashless Challenge”, but after reading about it I have to say that I am quite alarmed.  Visa is trying to “encourage” businesses to go cashless, and one of the ways that they will be doing this is by “awarding up to $500,000 to 50 eligible US-based small business food service owners who commit to joining the 100% cashless quest”.  The food industry is still one of the last bastions where cash is used very heavily, and so it makes sense that Visa would want to target that segment.  Of course the more people that use cards to pay for meals, the more money that Visa will make.

Trump: ‘Let ObamaCare fail and then come together and do a great healthcare plan’

“As I have always said, let ObamaCare fail and then come together and do a great healthcare plan. Stay tuned!” he tweeted.

Mr. Trump also called out Democrats, and a few Republicans, for failing to work on the legislation.

…Around 1,000 youths and young men gathered at the grounds of Schorndorf Castle on Saturday, throwing bottles at festival-goers and police.

“The violence faced by police was shocking,” a police spokesperson said, as quoted by German media.

When police began arresting one person on suspicion of causing serious bodily harm, others within the group “showed solidarity” with the man and intensified their assault against officers, according to law enforcement officials.

Police then called for backup, prompting more officers to arrive at the scene in riot gear, “to shield the arrest and to prevent an attack.”

Authorities also called in support from nearby towns, to prepare for what they referred to as “massive potential for violence.”

Magnitude 7.8 earthquake strikes off the coast of Russia

The quake was followed by several aftershocks, including a couple above magnitude 5.0. The earthquake was originally reported as a 7.4 magnitude, but it was subsequently upgraded to 7.8.