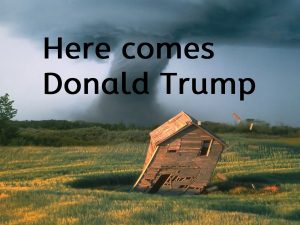 President Donald Trump continues to be like a political and diplomatic tornado that whips up the dust and debris wherever he goes. This week, his administration assaulted the Western Wall, insulted the Netanyahu administration, shifted US Middle East policy away from Israel by visiting Saudi Arabia first, and now, he is under investigation over the Russia scandal.

President Donald Trump may have angered the Israeli government just days before his trip to the Middle East. There has been speculation that Trump would visit the Western Wall, the holiest site in Judaism, during his Israeli trip, which would make him the first sitting US president to do so. However, Israel’s Channel 2 reports that while planning the visit, a Trump aide questioned Israel’s control over the holy site, located in disputed East Jerusalem.

“The most useful way to look at President Trump’s strategy is to see him as the anti-Obama,” said Robert Satloff, executive director of the Washington Institute for Near East Policy. “He is definitively changing American foreign policy from the Barack Obama era to the Donald Trump era as it concerns the Middle East.”

Trump is not being “anti-Obama”. He is, in fact, doing EXACTLY what Obama did when he went to the Middle East which was a stop in Saudi Arabia where he BOWED to the king. Remember that? This time, it is a different President and a different king, but the act is the same. The US is bowing to Saudi Arabia politically, economically (by funding its Middle East war with Iran) and religiously (by allowing Islam to overrun the United States).

Further Evidence That Trump Is The Same As Obama:

President Donald Trump responded to reports Monday that he revealed [Israeli] highly classified information to senior Russian officials during an Oval Office meeting last week, putting a source of intelligence on the Islamic State at risk. He defended revealing the information to Russian officials by saying he shared “facts pertaining to terrorism and airline flight safety” and had “the absolute right” to do so.

The Justice Department appointed Robert S. Mueller III, a former F.B.I. director, as special counsel on Wednesday to oversee the investigation into ties between President Trump’s campaign and Russian officials, dramatically raising the legal and political stakes in an affair that has threatened to engulf Mr. Trump’s four-month-old presidency.

Israeli security chiefs were gravely concerned Wednesday, May 17, when they learned that a high-ranking Iraqi military delegation had arrived in Damascus, the first in decades during which the Iraqi and Syrian ruling regimes were at odds, for a discussion on the situation unfolding on the Syrian-Iraqi border – in particular the Al-Tanf crossing. DEBKAfile’s military sources reported on May 15 and May 16 on the potential for a clash of arms over this strategic crossing, which is situated at the intersection of the Jordanian, Iraq, and Syrian borders and commands the No.1 Route linking Baghdad with Damascus and the Jordanian capital of Amman.

Iraq is a member of Iran’s coalition. Iran, who I believe is simultaneously the end time King of the North and the white horse of Revelation, has formed a coalition with Iraq, Syria and Hezbollah. This coalition is backed by the ancient Medes who are today’s Russians.

The King of the North is positioning himself for an invasion of Israel and Jordan before moving on to Egypt and Saudi Arabia and the other nations mentioned in Daniel 11.

The United States called Wednesday’s first-ever U.N. Security Council consultations on Venezuela because the crisis is getting worse and the Trump administration wants to prevent another conflict like Syria, North Korea or South Sudan, U.S. Ambassador Nikki Haley said.

During President Trump’s campaign, people associated him with the ancient Cyrus the Great who allowed the Jewish captives to return to Jerusalem. What they failed to understand was that 1) Cyrus was a man of war all of his life. Trump is like Cyrus. He is always in a battle of some kind and now that he has an entire military with which to overrun the planet, he could be worse than his predecessor, Obama, the Nebuchadnezzar figure.

2) The purpose of war is to make tributaries, vassals to a regime. Trump is proving himself to be very similar to Obama in many ways. One way he may turn out to be like Obama, and to continue Obama’s policies, is by continuing on the United States quest for imperialism.

The WannaCry ransomware attack has spread to 150 countries

Since its discovery on Friday afternoon, the WannaCry ransomware attack has continued to spread.

Following Trump’s surprise election victory in November, stocks surged as investors anticipated the implementation of a robust pro-business agenda. But now that the Trump administration is deeply embroiled in controversy, many fear that Trump’s pro-business agenda will never become a reality.

The parallels with Argentina are striking. For starters, the oversight board has taken an extreme and unyielding position on Puerto Rico’s ability to service its debt. The board insists that, over the next 10 years, Puerto Rico can only afford to spend about 7 percent of its revenues servicing debt. This percentage defies all commercial norms for sustainable debt service.

BREXIT: The Guardian view on the economy: it’s bad

The chancellor today played down the fall in real incomes as an aberration caused by a temporary spike in inflation, but this argument doesn’t really stand up to serious scrutiny. The unemployment rate was last this low in 1975, at which time the annual inflation rate was 10 times as high as its current rate, and wages were growing at 30% a year. The really remarkable feature of the economy is the weakness of earnings, especially at a time when the percentage of people in work is close to 75%, the highest since modern records began.