The new law says Israel will not grant entry or requests for permanent residency to people who “have issued a public call to boycott the State of Israel or pledged to participate in the said boycott.”

According to the officials, unlike Israel’s 2006 war with Hezbollah in Lebanon, a future war would feature the Lebanese Armed Forces on Hezbollah’s side.

The umbrella organization of Conservative synagogues passed a resolution on March 1 allowing individual congregations to decide whether to admit non-Jews as members. The resolution, the first of its kind in the Conservative movement, passed overwhelmingly with a 94-8 vote during a Special Meeting of the United Synagogue of Conservative Judaism (USCJ) General Assembly, JTA reported. This is significant for the ingathering. The Jews in Israel are becoming more accepting of non-Jewish believers. The trend appears to be spreading. 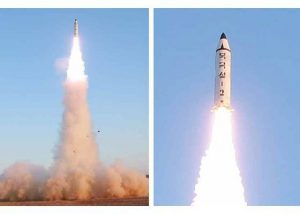 The four missiles were fired from a known launch site on North Korea’s west coast, not far from the border with China, at 7:36 a.m. local time. They flew more than 600 miles across the country before splashing into the sea between Japan and the Korean Peninsula, the South’s Joint Chiefs of Staff said in a text message to local reporters.

Iran says it has successfully tested a Russian-made long-range missile, stoking anxieties as tensions between the nation and the United States continue to climb. A report Saturday from the official IRNA news agency claimed that Iran officials had successfully launched an S-300 System missile from in the nation’s central desert during military tests. That system has a range of 125 miles and can track and hit multiple targets. Purchased in an $800 million deal, the Russian-crafted missile took 10 years to arrive after pressure from the US and Israel encouraged Russia to suspend its delivery.

In what the party describes as an “extremely rare move” in the Lords, the Lib Dems will now vote against the Brexit Bill at the third reading later on Tuesday. Peers in the House of Lords have voted down calls for a second referendum on the terms of the final Brexit deal by an overwhelming majority. Rejecting the Liberal Democrat’s amendment to the Government’s Brexit Bill, peers voted against a second referendum by 336 votes to 131 – a majority of 205.

Why Falling Unemployment May Spell Bad News for Business Investment

While companies cite a variety of reasons for not investing, a lack of qualified workers was a top concern, according to the report. And among growing, profitable and stable companies, “constraints on talent acquisition and retention is easily the largest issue when it comes to investment spending headwinds.” More than half of the businesses with revenue in excess of $10 million reported labor constraints as a barrier.

President Trump’s weekend allegations of a “Nixon/Watergate” plot to wiretap his 2016 campaign confused intelligence analysts, befuddled members of Congress and created fresh work for fact-checkers. Within 24 hours of his allegations, made on Twitter, the administration conceded that the president was basing his claim not on closely held information, but on a Breitbart News story quoting the conservative radio host and author Mark Levin.

WikiLeaks begins its new series of leaks on the U.S. Central Intelligence Agency

Today, Tuesday 7 March 2017, WikiLeaks begins its new series of leaks on the U.S. Central Intelligence Agency. Code-named “Vault 7” by WikiLeaks, it is the largest ever publication of confidential documents on the agency. The first full part of the series, “Year Zero”, comprises 8,761 documents and files from an isolated, high-security network situated inside the CIA’s Center for Cyber Intelligence in Langley, Virgina. It follows an introductory disclosure last month of CIA targeting French political parties and candidates in the lead up to the 2012 presidential election.