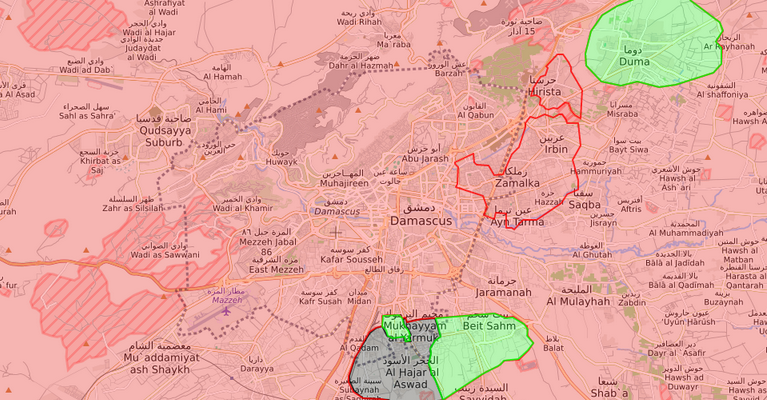 According to Inside Syria Media Center military correspondents, another checkpoint was opened for the withdrawal of terrorists and their families from the village of Irbin in Eastern Ghouta on March 24, 2018. In addition, there are dozens of buses ready to transport civilians to refugee camps and ambulances for those affected by the bombing.

Despite the fact that jihadists’ snipers are actively shooting in this area to kill government forces and do not observe the ceasefire, the initiative with the opening of the humanitarian corridors in Eastern Ghouta proved to be quite successful. As for now, tens of thousands of civilians were able to leave the territory controlled by the radicals.
In addition, the unique aspiration of B. Assad and his allies to solve the problem of Eastern Ghouta using peaceful means has affected the militants themselves. Many of them do not want to risk their lives, even for the money of their western patrons.
Attempts by the Ahrar as-Sham and Jaish al-Islam terrorist groups to unite for a joint offensive towards the positions of the Syrian Arab Army have ended in failure. The militants collapsed even to organize a joint defense. Apparently, jihadists are demoralized, and disagreements between the groups are still very strong hindering their unification.
The situation facilitated an agreement between the terrorists and the Russian Reconciliation Center for Syria, and the process of military withdrawal began. Islamists from Ahrar ash-Sham left Harastа area with their families towards Idlib de-escalation zone.
According to QalaatAlMudiq, some of the radicals from Harasta have already reached the area of North Hama.
The militants holding Jawbar, Zamalka and Irbin reported on the decision to surrender and stop shelling, following the example set by the Ahrar ash-Sham.
It can be concluded right now that the Eastern Ghouta is completely liberated from the terrorists. It seems that recapturing Douma, Beit Sahm, Babbila, and Yarmouk camp’s area is a matter of time.