King Abdullah of Jordan visited President Donald Trump this week and gave Trump the message that moving the US embassy to Jerusalem is a bad idea. Jordan’s concern is that the Trump administration’s proposed Jerusalem move will touch off mass protests at home. Using the Jerusalem embassy as a means to solve the Israeli-Palestinian problem is turning out to be more difficult than first thought.  Jordan’s disapproval may be the biggest sticking point Trump has yet. He may be learning that there are more security issues to be concerned about than just Israel’s.

“Jordan warned in unusually brusque terms that moving the embassy would cross a “red line” and could entail “catastrophic” consequences”. Such a move would infuriate ISIS whose operatives are located worldwide, but concentrated in the Middle East. Jordan has had several ISIS related security incidents in the past year and ISIS operatives are working behind the scenes to build sympathy for their cause with Jordanians. It is feared that moving the US embassy to Jerusalem will spark protests instigated by ISIS. Other Arab leaders also reject the move and are calling for Trump to rethink his plan.

Concern is not limited to ISIS which is not the only warring faction that could erupt regionally. Protests and violence will likely not be limited to the Middle East, either. There are 35 known terrorist organizations operating training camps inside US borders.

Jordan’s Palestinians and refugee burden is heavy. It is one of only two Middle East nations that is taking war refugees in addition to already having millions of Palestinians. Jordan’s economy is reeling from the weight of the refugees even though Jordan receives humanitarian aid to help with the burden. “According to the U.N., there were 65.3 million “forcibly displaced” in the world in 2015—a record high. That number, of course, continues to grow.” “The economic fallout cost Jordan about $1.8 billion, or 32% of GDP.” President Trump moving the US embassy to Jerusalem could increase the numbers of refugees flooding Jordan if ISIS responds by up ticking its Syrian operation.

The Arab world does not want to deal with the Palestinians, either. They are ready for a peace deal. President Trump moving the US embassy may drop the Israeli-Palestinian issue in their laps again because of the violence that could ensue. Arab leaders will not appreciate the protests and violence this move could cause in their own countries.

One solution for the Israeli-Palestinian problem touted by American Thinker is for the Jordanian government to invite all Palestinians to live and work in Jordan. The American Thinker’s article presents the Jordan Opposition Coalition (JOC) solution. The idea is based on the fact that “Jordan received 78% of the territory promised to Israel”. “Although the British didn’t breathe life into this agreement, they did separate Trans-Jordan from Palestine in 1922 with the Jordan River being the boundary between them. Trans-Jordan (Jordan) thus got 78% of the lands promised to the Jews. The remaining 22% consisting of the land between the Jordan River and the Mediterranean was to be the Jewish state. This was enshrined in the Palestine Mandate signed by the League of Nations in 1922.” 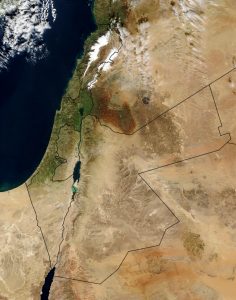 The JOC’s plan “seeks to execute a feasible two-state solution where Jordan is the natural homeland for all Palestinians, and Israel becomes sovereign over all soil west to the River Jordan.”

What if the JOC plan was implemented? Can we even imagine that Palestinians would leave their Israel homes peaceably? Can anyone think this plan, like all others before it, will work without protests and violence between the Jews and Palestinians?

According to Ted Belman of American Thinker, this plan could only work if “the corrupt, terror-supporting and double-speaking Hashemite royal family leaves Jordan.”  He believes, as does the JOC, that King Abdullah “is part of the problem and must be replaced by Palestinians.”

Where are JOC’s and Ted Belman’s head? The plan to replace King Abdullah with a Palestinian king is the most ludicrous idea yet! The Palestinians have proven that they cannot govern themselves. The hatred they have for Israelis would not suddenly disappear just because they get a bigger piece of land and Jordan gets a new King. This would make the situation worse. Having a new, and likely Palestinian king in charge of Jordan’s army would not be the smartest plan at all!

The Jordanians love King Abdullah and would never stand by without a fight while the UN or any other entity tried to replace him. He is “literally loved by everyone here, it’s so rare to find people who hate him. Everyone here had to mention at some point in their life times how proud they are to have such a king like him. He is trying his best to show the real Islamic message, he is fighting ISIS to make sure his country stay safe. Furthermore, he is so humble that he fights ISIS in the war zone. King Abdullah and his wife Queen Rania have also been at pains to stress that moderate Muslims must do more to combat extremism.”

Implementing the JOC’s and American “non-“Thinker plan would do more to spin the earth into global war than continuing with the current state of affairs. Furthermore, Ted’s accusation that King Abdullah is corrupt, supports terror and tells lies are charges that everyone makes against personally disliked leaders. Blanket statements like this are slander. They are not part of a solution.

A Second Option To The Palestinian Problem

This solution? A Palestinian-Jordanian confederation. The Jordanians would control Palestinian areas of the West Bank. “Jordan would expand the functional links that have always existed between the cities of the West Bank and Amman. It would encourage Palestinians in the West Bank to look to a link with Jordan as the best guarantee of their political and economic future.”

The Palestinians’ money would be overseen by Jordan. “Channeling money to the Palestinians through Jordan would also improve transparency and assure that less money is channeled to incitement and terrorism. It will be important to gradually wean away international aid from the PA to Jordan to enable the latter to extend its influence in the West Bank. Israeli-Jordanian security cooperation, historically extensive, can also play a vital role in securing the cooperation of the security forces presently operating under the Palestinian Authority.”

Can Trump get the Israelis to agree to Jordan having this much control within the 1967 borders? Will the Palestinian Authority quietly accept having their terror funds quietly diverted to the Jordanian government? According to JPost, “The reemergence of a Jordanian role in the disposition of the West Bank is much preferable to the present international fixation on the concept of an independent, contiguous Palestinian state whose border is based on the 1967 line. Such a Palestinian state is no less of a long-term strategic threat today than it was before the advent of Oslo. So too is Palestinian irredentism a threat to Jordan’s security. A Palestinian state in Judea and Samaria is likely to succumb to a Hamas takeover, to Iranian influence, and become a theocratic and autocratic state along the lines Hamas presently rules in Gaza. Moreover, it is unobtainable.”

Does Trump Have Another “Peace” Enticement Option?

President Trump is complicating matters by ignoring overtures made by the Palestinian Authority to his office. According to Jordan’s official news agency Petra, President Trump and King Abdullah “agreed on the need to intensify efforts to reach a solution to the Israeli-Palestinian conflict.” Trump has said there need to be direct negotiations between the parties. But his refusal to talk with or meet the Palestinians is not winning their cooperation for future talks. So if Trump is not really moving toward talks, what is he doing?

Trump may be trying to use the embassy move as a “trump” card, pun intended. But moving the US embassy to Jerusalem is not a viable option unless he were to consider putting an embassy, consulate or mission in East Jerusalem for the Palestinians. This move may become necessary to entice all the parties back to the peace table for negotiations.

The problem will not be the opinions of the Israelis, Palestinians, Arab leaders, the United Nations, or any other people interested in solving this issue. The problem with putting American offices in both territories is that YHVH will view it as Trump having divided the city of Jerusalem. According to Bible prophecy, this is a BIG no-no! It will get people killed, especially in the land that perpetrates such a move.

President Trump is a gambling problem-solver. He is exactly the kind of problem solver the White House did not need. Risks that he takes to prove he is the king of the “art of deal making” could prove disastrous. He is not the kind of man to let such a great challenge as the Israeli-Palestinian issue remain as a status quo. Donald Trump will do something. It will be interesting to see if he plays right into YHVH’s hands.