Don’t feel like reading? Listen! Or read and listen at the same time! 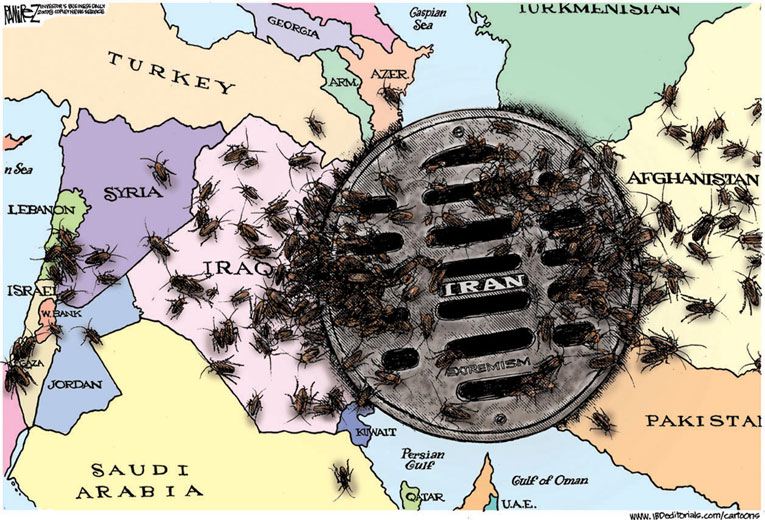 Iran’s power in the Middle East increases by the day. Iran has funded and armed Hezbollah, and helped Syria’s Bashar Al-Assad and is now cozying up to Qatar over Saudi Arabia’s recent boycott. This is only the latest move to gain more allies and increased power as Iran seeks to rule the Middle East with an eye on ruling the entire earth.

Iran has been busy overthrowing Sunnis in Iraq, a task begun by the United States with the overthrow of Saddam Hussein, the Sunni-born, but secular, dictator. George W. Bush’s overthrow of Iraq’s Sunni-led government was a huge mistake that is a large part of the current mess in the Middle East.

George W. Bush’s effort to gain hegemony in the Middle East for the United States and his New World Order oil-baron friends was a huge mistake with monumental implications that play into the Bible’s end of days scenarios!

“When the United States invaded Iraq to topple Saddam Hussein, it saw Iraq as a potential cornerstone of a democratic and Western-facing Middle East, and vast amounts of blood and treasure — about 4,500 American lives lost, more than $1 trillion spent — were poured into the cause.”

“At the same time that Obama was making the nuclear deal with Iran, he was also pressuring Iraq’s Shi’ite prime minister, Nuri Kamal al-Maliki, and his Shiite-dominated government, to form a multi-sectarian government with Sunnis and Kurds in an effort to heal the rifts being exploited by the insurgents – ISIS.”

ISIS was a United States creation (under the instruction of Barack Obama) for the purpose of continuing the war in Syria. ISIS are Sunnis and they are killing the Iraqi Shi’ites. Obama made deals with one hand while working with the other to undermine the Middle East’s Shia population in a bid to settle the 1400-year-old Islamic question of Mohammed’s succession – in favor of the Sunnis, of course. Barack Obama is a Sunni Muslim.

The Iranians saw through Obama’s ploy, made the nuclear deal which was very much in their favor and proceeded to strengthen ties with Iraq. The rise of Shia Islam in the Middle East with its subsequent war against Sunni ISIS will have the outcome of triggering global war such as has never been seen before.

“From Day 1, Iran saw its opportunity: a chance to make a client state of Iraq. In that contest, Iran won, and the United States lost.

Today, the United States has less influence in Baghdad than Iran does. The U.S. also failed to control Iraq’s oil fields.

The Kurds have taken the oil-rich contested city of Kirkuk and hinted at the possibility of separating from the Iraqi state. The United States has been compelled to send military advisors back to Iraq, and it may no longer have enough influence with any of the parties or in Baghdad to preserve a unified state.

Sixteen years of U.S. meddling have resulted in Iraq being owned and operated by Iran, for all intents and purposes. Now, Iran – backed by Russia – is rising as the Book of Daniel’s King of the North.

“Iran’s dominance over Iraq has heightened sectarian tensions around the region, with Sunni states, and American allies, like Saudi Arabia mobilizing to oppose Iranian expansionism. But Iraq is only part of Iran’s expansion project; it has also used soft and hard power to extend its influence in Lebanon, Syria, Yemen and Afghanistan, and throughout the region.

Iran’s influence in Iraq is not just ascendant, but diverse, projecting into military, political, economic and cultural affairs.

At some border posts in the south, Iraqi sovereignty is an afterthought. Busloads of young militia recruits cross into Iran without so much as a document check. They receive military training and are then flown to Syria, where they fight under the command of Iranian officers in defense of the Syrian president, Bashar al-Assad.

Passing in the other direction, truck drivers pump Iranian products — food, household goods, illicit drugs — into what has become a vital and captive market.

Iran tips the scales to its favor in every area of commerce. In the city of Najaf, it even picks up the trash, after the provincial council there awarded a municipal contract to a private Iranian company. One member of the council, Zuhair al-Jibouri, resorted to a now-common Iraqi aphorism: “We import apples from Iran so we can give them away to Iranian pilgrims.”

Perhaps most crucial, Parliament passed a law last year that effectively made the constellation of Shiite militias a permanent fixture of Iraq’s security forces. This ensures Iraqi funding for the groups while effectively maintaining Iran’s control over some of the most powerful units.

Iran’s great project in eastern Iraq  …is a piece of what analysts and Iranian officials say is Iran’s most pressing ambition: to exploit the chaos of the region to project influence across Iraq and beyond. Eventually, analysts say, Iran could use the corridor, established on the ground through militias under its control, to ship weapons and supplies to proxies in Syria, where Iran is an important backer of Mr. Assad, and to Lebanon and its ally Hezbollah.”

This new corridor will pave the way to an easy invasion of Israel.

President Donald Trump “has indicated that he will pay closer attention to Iraq as a means to counter Iran. The question is whether it is too late.

“Iran is not going to sit silent and do nothing,” said Sami al-Askari, a senior Shiite politician who has good relationships with both the Iranians and Americans. “They have many means. Frankly, the Americans can’t do anything.””