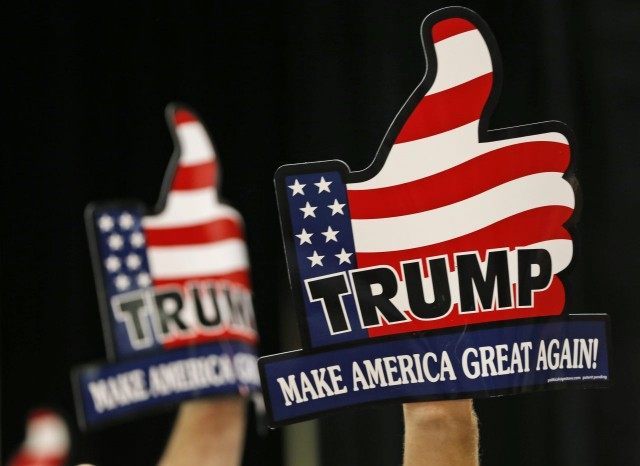 Donald Trump’s election has spurred a range of reactions among his supporters ranging from sighs of relief to celebrations. The religious people among them are relieved and believing that YHVH has pulled America back from judgement. Many claim that Donald Trump is a modern day “Cyrus of Persia”. Netanyahu and the Israeli right declared ‘the era of a Palestinian state is over’. Netanyahu said he sees US-Israel ties ‘reaching new heights’ after Trump’s victory and that this is ‘the end of the two-state solution’. A woman on Facebook commented that ‘there is a Higher Power working here. One that is mysterious, yet merciful, loving and good. One that always does what is in our best interest. And because of that we have to believe that this is what’s best for us; both personally and globally. So let’s put away the xanax and relax….we’re in God’s loving and generous hand. And one thing is for sure- we are in for quite an entertaining four years. Who doesn’t like a good comedy show?’ Does YHVH have a plan to let America, “Babylon”, slide into a “Persian” status without judgment for the next four years or has He just made the move that will bring judgment about? Is YHVH repeating at the end of days the things that were done before?

Understand that Obama delivered the world to “end times Babylon”. After ancient Babylon came ancient Persia. It is possible that Trump is indeed the end times ‘Cyrus of Persia’ who rescues the people from the clutches of evil Babylon to make them into Persian citizens. This, many believe, is a good thing. But it may be just the next step in YHVH’s progression to bring about the end.

When Cyrus of ancient Persia declared that the Jews could return to Jerusalem, one of their first acts was to set up the Altar again at the Temple’s site.

Ezr 3:1 And when the seventh month was come, and the children of Israel were in the cities, the people gathered themselves together as one man to Jerusalem.
Ezr 3:2 Then stood up Jeshua the son of Jozadak, and his brethren the priests, and Zerubbabel the son of Shealtiel, and his brethren, and builded the altar of the God of Israel, to offer burnt offerings thereon, as it is written in the law of Moses the man of God.
Ezr 3:3 And they set the altar upon his bases; for fear was upon them because of the people of those countries: and they offered burnt offerings thereon unto the LORD, even burnt offerings morning and evening.
Ezr 3:4 They kept also the feast of tabernacles, as it is written, and offered the daily burnt offerings by number, according to the custom, as the duty of every day required;
Ezr 3:5 And afterward offered the continual burnt offering, both of the new moons, and of all the set feasts of the LORD that were consecrated, and of every one that willingly offered a freewill offering unto the LORD.
Ezr 3:6 From the first day of the seventh month began they to offer burnt offerings unto the LORD. But the foundation of the temple of the LORD was not yet laid.

The Jews’ celebration quickly turned into despair because ‘the people of the land’ frustrated and blocked the Jews’ further efforts to build the Temple.

Ezr 4:1 Now when the adversaries of Judah and Benjamin heard that the children of the captivity builded the temple unto the LORD God of Israel;
Ezr 4:2 Then they came to Zerubbabel, and to the chief of the fathers, and said unto them, Let us build with you: for we seek your God, as ye do; and we do sacrifice unto him since the days of Esarhaddon king of Assur, which brought us up hither.
Ezr 4:3 But Zerubbabel, and Jeshua, and the rest of the chief of the fathers of Israel, said unto them, Ye have nothing to do with us to build an house unto our God; but we ourselves together will build unto the LORD God of Israel, as king Cyrus the king of Persia hath commanded us.
Ezr 4:4 Then the people of the land weakened the hands of the people of Judah, and troubled them in building,
Ezr 4:5 And hired counsellors against them, to frustrate their purpose, all the days of Cyrus king of Persia, even until the reign of Darius king of Persia.
Ezr 4:6 And in the reign of Ahasuerus, in the beginning of his reign, wrote they unto him an accusation against the inhabitants of Judah and Jerusalem.

“Cyrus Trump” may make it possible for the Jews to rebuild the Altar and to attempt to rebuild the Temple. The Jews are ready for it, and the world is ready for a reason to go to war with Israel, so setting up and operating YHVH’s Altar would be just the provocation “Gog” needs to bring war and the Antichrist to shut it down, thus triggering the Great Tribulation.

The Altar is only part of a possible negative scenario for America and the world that could result from a Trump presidency. Putin has gained the upper hand in both war theaters of Syria and Europe’s eastern border. Obama paved the way to WW3 and Putin is now driving on it. Putin believes he can “work with” Trump. Behind that expression of cooperation lurks a hidden agenda to continue his rise to power in the ‘other’ New World Order – the axis of Russia, Iran, China and North Korea along with those countries who are aligned under BRICS (Brazil, Russia, India, China, and South Africa).

Trump repeated several times that he will ‘make America great again’, that he will ‘put America first’ and that he will ‘work with’ those nations who are willing to work with him in his acceptance speech. What if America’s power has been so eroded that the rising eastern nations no longer need to ‘work with’ Trump or America? What if ‘working with’ is a euphemism for ‘taking over’, conquering by whatever means is necessary and available, including war?

These are only two of the possible negative scenarios that can come from a Trump Presidency. Donald Trump may have a personal genuine interest to restore America to her former glory. The question to be asked, however, is whether YHVH just set America up for her final downfall? YHVH may use another ‘Cyrus of Persia’ to bring the wars that trigger the Great Tribulation so that this era can be finished off. Cyrus was used by YHVH to bring about His plan for Jerusalem the first time and He likely is doing the same again.